I had this whirlwind romance with Nepal, and I was very sad to leave my trekking family. Part of me thought I should just end my travels there because it couldn’t get any better than what I just experienced. Nothing could top Nepal.

I was right. NOTHING could top that experience, but that didn’t mean I couldn’t enjoy my time in Australia, right? Things started out a bit bumpy. Remember when I lost my passport in Poland? Well, since I had to apply for a visa before visiting Australia, that meant that I needed to do it again since my passport number had changed on my emergency passport that I got in Poland. That aspect never occurred to me until I was trying to check-in to my flight leaving Kathmandu and I was being denied my boarding pass. In my head I was freaking out. To the outside world I was keeping my cool, but also being firm about needing help applying for my new Australian visa because I was unable to access the airport’s free wi-fi. It’s a simple online process and you typically get a response within 10 minutes, so I wasn’t too worried except for the fact that my flight was only a few hours away and I still had a couple of security checkpoints to go through that can sometimes take a bit of time. Everything worked out, I took a photo of my new visa information (just in case), and got through security with about 10 minutes to spare before they started getting folks ready for boarding.

My flight arrived to Singapore, where things weren’t exactly clear to me on where to go to catch the skytrain to the terminal I needed…it could have been that I was just tired and it was late. I walked very briskly to my gate which was a long ways away. Again, this could be attributed to my sleepiness. I made it just in time, being one of the last to board the plane. I got stopped and had to explain my passport situation a few times before being allowed to board, which became part of my normal travel experience the rest of the way. I thought I might have the row to myself, but at the last minute a man made his way back to me and said, “I bet you thought you had the row to yourself, huh? Sorry to tell you that my seat is next to you.” I did think that, but he was really nice, and we ended up talking for a bit. He even gave me some recommendations on things to see while in Australia.

It was a long flight, I was exhausted, and unfortunately I didn’t get much sleep on the plane. I arrived to the Brisbane Airport to once again be detained because of my passport and visa situation.  Once I got pass that, I arrived to the luggage area only to find that it was missing!!! I am one of those people who wears multiple layers and some of the heavier and/or bulkier apparel when I fly to free up space and weight in my luggage. I was in jeans, wool socks, hiking boots, a t-shirt, and a hoodie in fairly warm weather. I spent the next hour waiting in line to report my missing bag and receive a small bag of complimentary essentials such as toothbrush, toothpaste, shampoo, a nail file, a plain white t-shirt, laundry detergent, soap, and $150 Australian. Once again, my internet didn’t work, so I had no way to tell my friend, Justin, what was going on or what was taking me so long. He was waiting outside and after I told him my story, he just laughed. I could do nothing else but laugh as well.

Justin and I met 5 months earlier when I went storm chasing with the company he guides for. He’s a load of fun, doesn’t mind indulging people when they want him to be super Australian, and is extremely kind. I was so grateful he was willing to pick me up and hang out with me for the day! We decided to spend our time at the Australia Zoo…you know, Steve Irwin’s Zoo!! I got to feed kangaroos, pet a Koala’s butt, and see all the things that can kill you in Australia! I used to be obsessed with the Crocodile Hunter so it was really amazing to be in the place where they filmed parts of the show. I also love animals and the way things are set up allows for a lot of interaction between you and the animals.

Sorry for the lame zoo phone photos…sometimes I just want to have an experience without a big bulky camera. 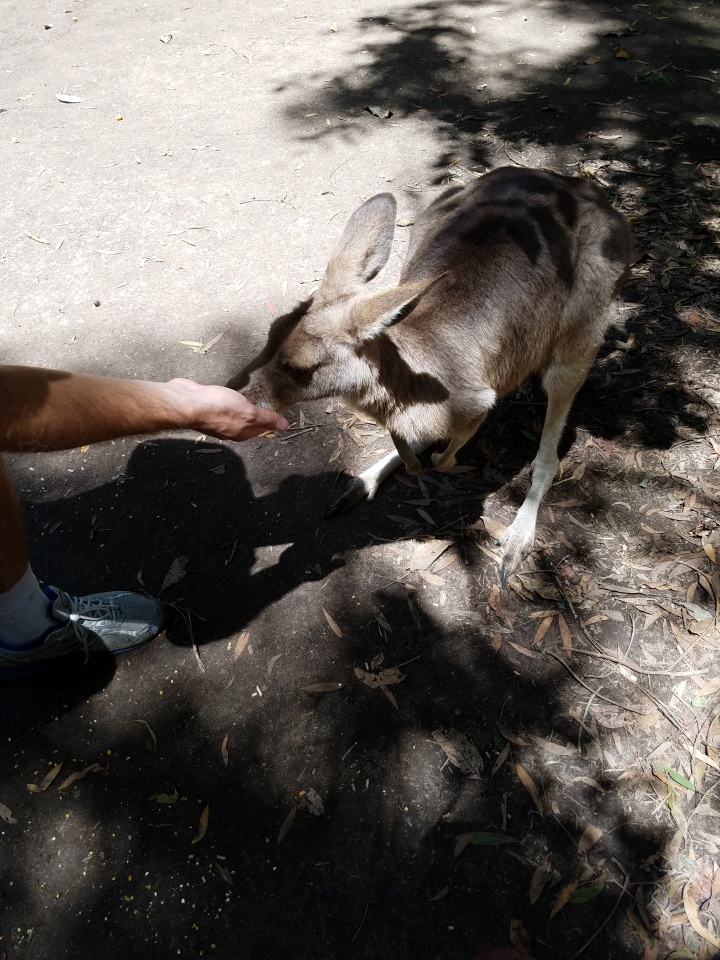 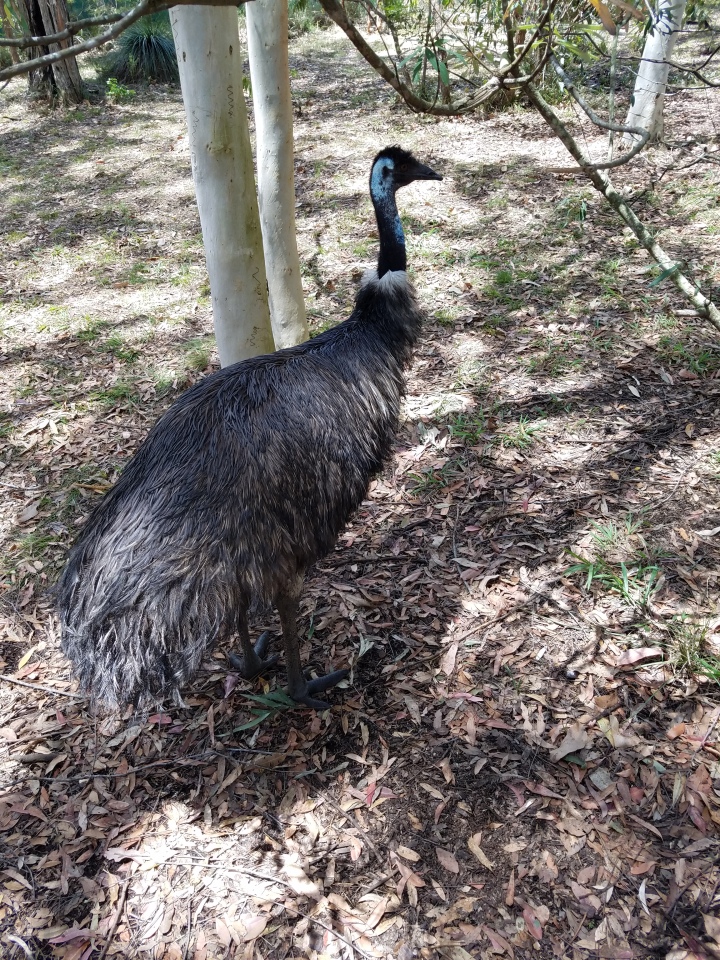 Justin dropped me off at my AirBnb, which was a really nice apartment near downtown Brisbane. I received a call that my luggage was located and they’d be delivering it to me, so I was very happy and decided not to make a stop to purchase anything while Justin and I were driving back from the zoo. That was a mistake. My bags did not arrive until two days later. I had to wear the same clothing, in warm weather for 3 days straight. I didn’t really do anything my first few days because of that and the fact that I had a hard time finding an available rental car that was automatic that also had GPS.

My luggage was finally delivered and the next morning I was on a flight north going to Long Island. I was staying at this amazing resort, in my own private cabana looking over the water that was surrounded by tropical plants and wildlife. It was paradise, literally. Because this resort was self-catering (you brought your food to cook and prepare in a shared outdoor kitchen), I had my items picked and shipped to the island via a company that works specifically with the Palm Bay Resort. There was more than enough food for me using the 1 day plan for the three days I was there. Although much more expensive than I was used to spending for accommodations, this was well worth it. It was such a unique experience and there were lots of great things to keep me busy. If you go to this resort on this island, be aware that transportation to and from can range from around $100-600 (depends on if the one operator fills all passenger spots). I was unaware of this when I booked the hotel, and was pretty upset when I figured it all out. Fortunately, the resort worked with me and the boat operator had other passengers. Shortly after arriving, I went for a short hike to the other end of the island, swatted at the flies as I made my way to the beach, photographed what interested me, enjoyed being by myself, enjoyed the silence…the view…the dream that turned out to be reality. I never thought of myself as brave, strong, or inspiring and yet, that’s what people keep calling me. It still makes me uncomfortable, but I’m warming up to the idea that I am these things in a way. I dared to do all of this on my own, go outside of my comfort zone, and go with the flow. I’ve learned that life is much more satisfying when you challenge who you are and when you embrace growth and change. It can be uncomfortable, but the end result has always been worth it. 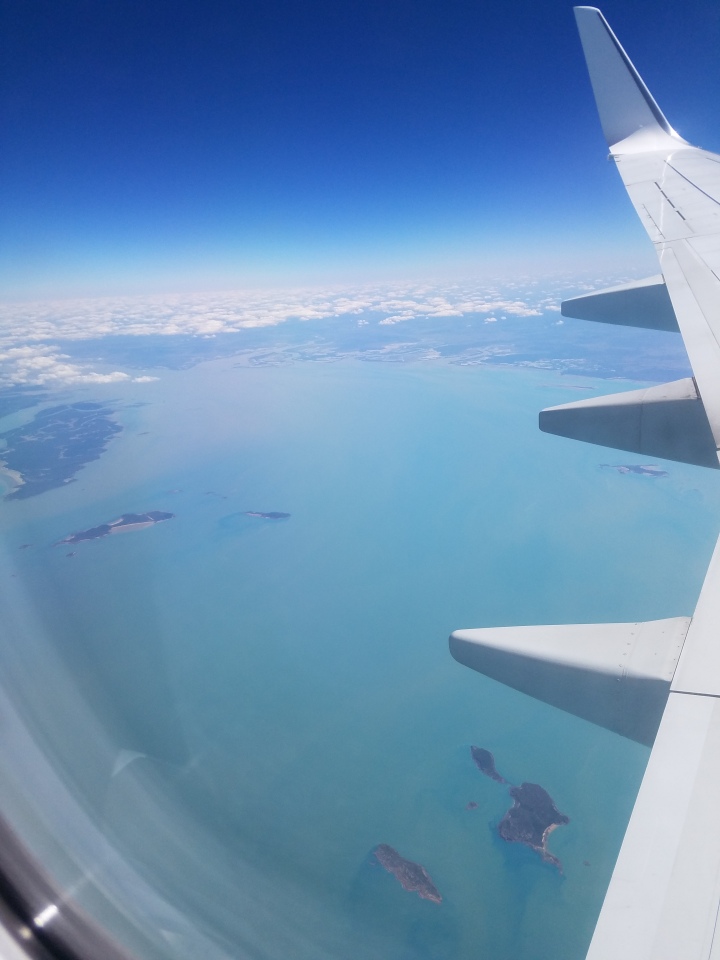 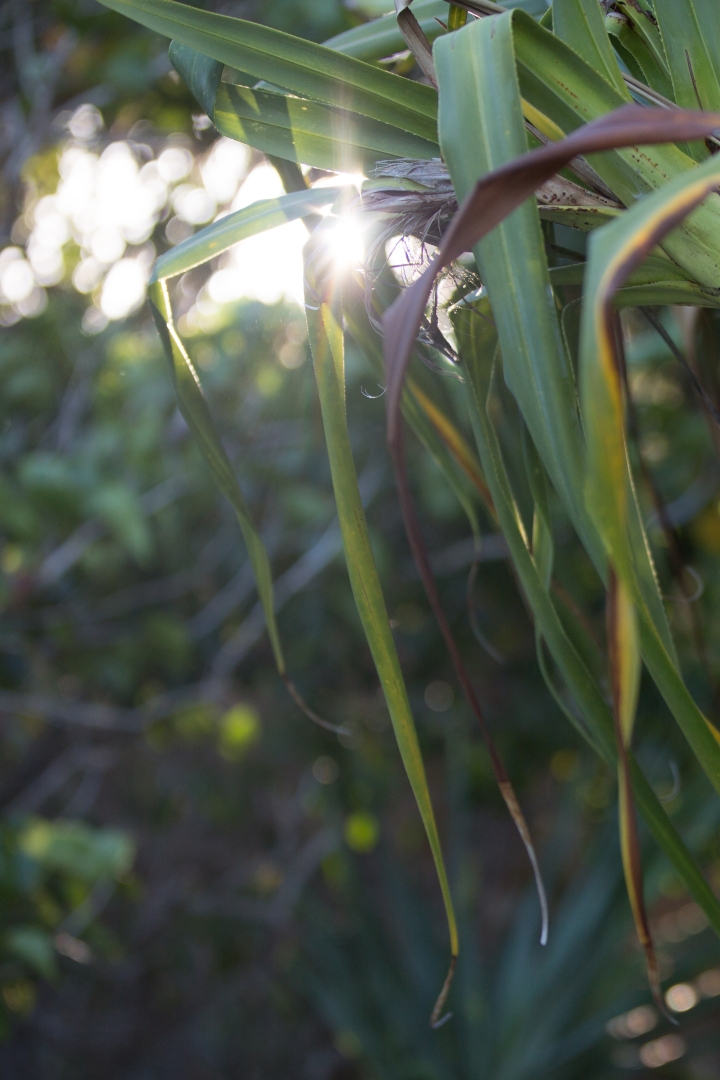 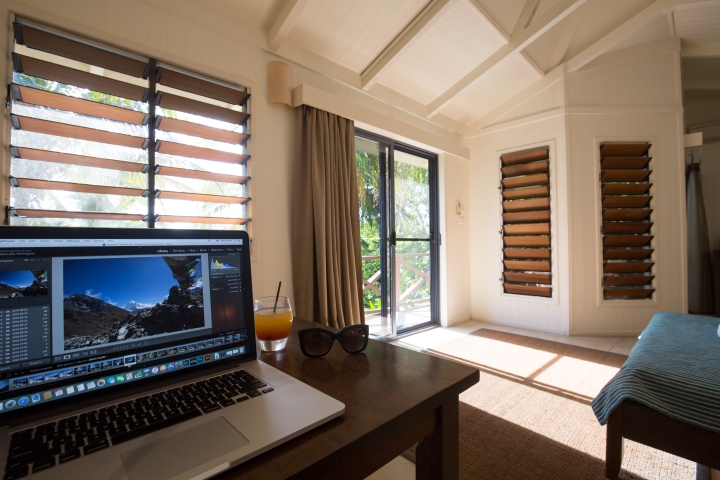 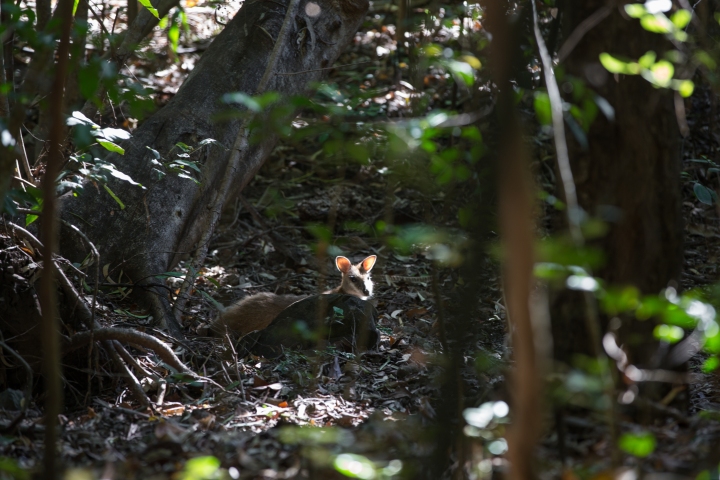 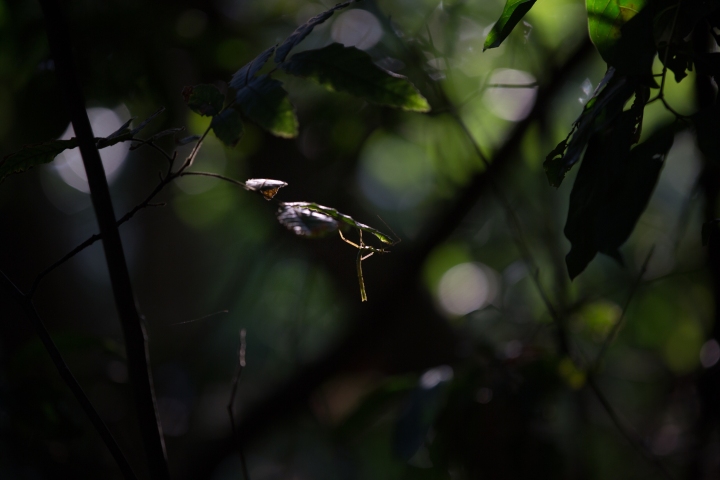 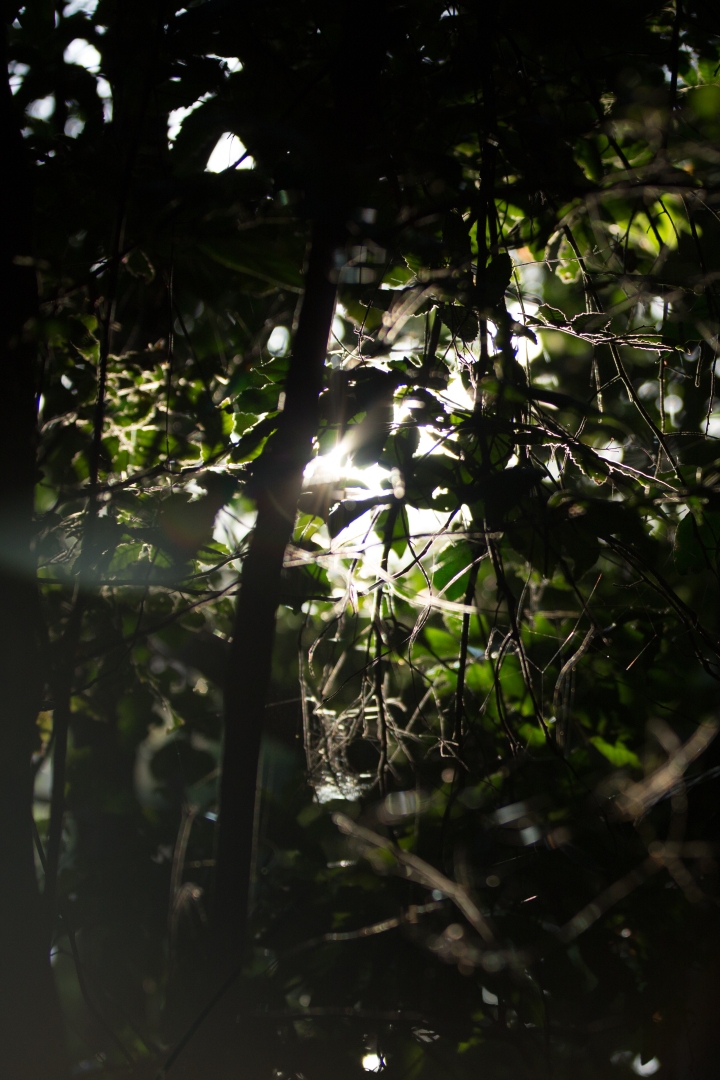 Anyway, I enjoyed a sandwich for dinner and gave Vegemite a try. It wasn’t horrible, but it wasn’t great.  I think in small portions and with other things, it’s tolerable. On it’s own on a cracker or bread, it’s not something I’d like to do again. I turned on some music, enjoyed my insanely expensive cheap beer, and then drifted off to sleep. The waves crashed onto the beach, the palms swayed in the wind, and the stars were plentiful. I did wake a few times to the murderous screams of one type of bird, but I can’t recall what it was named. A bit unsettling, but I’m glad the resort warned me about it, otherwise I would have been a bit freaked out.

The next morning, I had an early boat ride taking me to the mainland to catch a plane out to the Great Barrier Reef for a snorkel and then a swim at Whitehaven Beach. I was beyond stoked for this as I have been wanting to see this since I was a kid!

We loaded our small group of 6, including the pilot, into a small plane (the smallest I’ve ever been in). No one wanted to sit up front with the pilot so I happily jumped at the chance! I had an amazing view and I shot a ton of video…sorry if it’s excessive, I was just so excited!! I’ve never seen a blue like this…flying over the reef was such a treat, and I highly recommend it over taking a boat out. I was happy to pay for that experience (it was a hefty price, but totally worth it) especially since I don’t know how much longer people will be able to enjoy it. I loved my alone time swimming with the fishies. Definitely my favorite place in Australia.

So, I’m more of a photo person, if you can’t tell, but I need to make use of my GoPro!

After a swim we flew to Whitehaven Beach, had a bit of lunch, some champagne, and enjoyed the bath water that was the ocean. It was such a perfect day, one that I wish I could repeat over and over.

I flew back to Brisbane the next day, found a car rental that had an automatic and a GPS, and drove out to Mt. Tambourine. I spent the afternoon admiring the lush mountain and countryside, the views, and the dying storm system in the distance. I had big plans for the next day! I decided to go sky diving! I never really had any desire to do this, but I was feeling daring and dangerous, lol. I got a taxi to downtown Brisbane very early, and waited for my ride. A huge bus pulled up and a bunch of us got on. We then proceeded to make four or five stops to pick up even more people. All in all, it took about 5 hours to get to Byron Bay. Not my idea of how I wanted to spend my last day in Australia, but the view of the water and the beach from 14,000 ft. sounded like it would be worth it. We arrived to the location with people falling out of the sky! They were coming in at such a high speed, and yet their landings looked incredibly smooth. As we all lined up with our paperwork I noticed the trees swaying in the wind. An employee then came out to say that jumps were delayed for now due to high winds. They’d wait an hour or two to see if they’d have to cancel the day. I was super disappointed. We waited and waited, but things didn’t get better. The day got cancelled. I had no choice but to go with the bus of people into town and grab lunch and admire the view. I say this in all seriousness, I wasn’t happy that I wasn’t able to choose what I was doing on my last day…it didn’t help that one of the skydiving employees had major attitude with me when I was just asking questions. Anyway, I eventually got back to Brisbane and had to return my rental car. That was it. I didn’t utilize my time while in Australia. You live and you learn. I definitely want to go back now that I have a much better idea of what I want to do and see. Next time, I want to be outdoors way more and give the wildlife a better chance at killing me, lol!